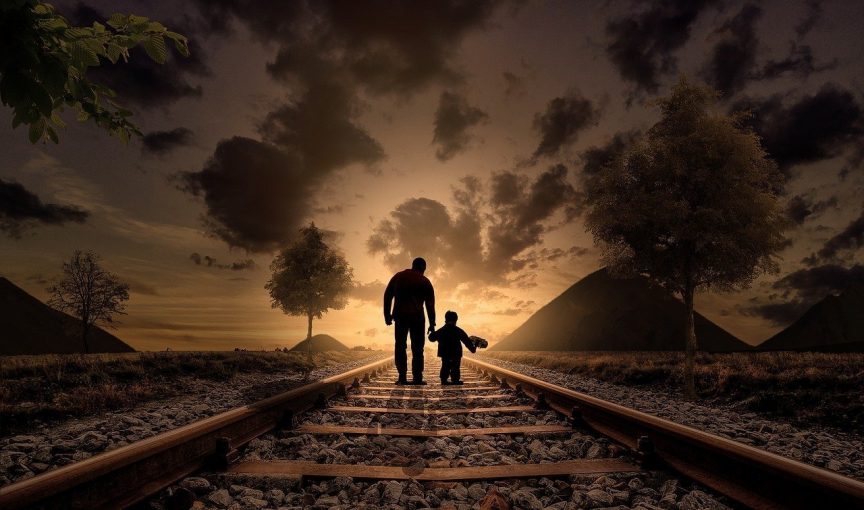 As a continuation of this series, this third section is easily the most ‘layered’ one of the three. I would encourage you to read Part 2 again if you haven’t read it recently (or at least re-read the story section itself). (Here is the link to Part 1)

Over the next few thousand years the kids got more and more afraid of Dad. While He never struck them, deprived them, or got angry at them, it seemed that He could do nothing right. Even the most generic words were perceived as punishment, favoritism, and ‘petty God stuff’. Ever the loving, patient, and generous Father, He continued to provide for their every need, and they continued to get more and more distant. It was hard to say what was worse, the fact that they told all of their friends what a terrible Father he was, or the fact that they were convinced the only way they could ever be completely punished was to be killed by their terrible Dad.

Finally, Dad and Jesus decided to try a different tactic. If the kids couldn’t receive the idea that Dad had no anger with which to punish them, maybe they could receive the idea that this ‘anger’ that they were so afraid of was finally satisfied by punishing someone else. When Jesus approached Dad with this idea, Dad knew exactly what Jesus was really saying. Jesus, just as loving and selfless and the Father, was not so slyly suggesting that He was willing to be the one who Dad ‘punished’. The hardest thing for Dad to swallow about this whole crazy plan was that he was NEVER angry in the first place. The issue between the kids and Him was literally ALL in their heads. This was the very reason he told them not to break that dang vase. Once they condemned themselves for breaking it, their consciences would never let themselves believe that they were still worthy of Dad’s love.

After thinking it over, Dad knew that Jesus was right, unfortunately. If the problem the kids had was a mental one, then the solution also had to be a mental one. But Dad also saw a new challenge that would arise out of this solution. If the kids saw Jesus get punished on their behalf, they would obviously feel Jesus’ love for them, but they would also solidify in their minds that Dad was, indeed, angry with them.

To solve this secondary problem, Dad came up with a genius idea. For the next few thousand years Dad told the kids the same story over and over and over every night when he put them to bed. This story was about a group of people known as the Israelites. These Israelites were just like his kids: afraid of an angry God that didn’t exist. A loving God who couldn’t seem to break through to them for them to see what He was really like. And in the midst of their relationship, a story of a coming redeemer that would restore them to their God.

Even though the Israelites could not understand their loving God even after the redeemer came, Dad still told that part of the story to the kids because He knew that the kids would react the same way. But, He also knew that if the kids knew this story, they would see where He hid the truth in it over and over again, and then a few of them might wake up to the realization that this story was about THEM and Dad, and would finally realize He was NEVER mad at them.

Meanwhile, Jesus had his own challenges to face in the implementation of His side of the plan. How would He plant the idea of a happy Father into their minds, without reinforcing their false premise that punishment was the way to make Dad happy? The ultimate answer came when He realized He needed to be able to identify with them at their level, so that they could identify with Him when He fulfilled His plan.

So naturally He disguised himself as one of the younger kids and started telling them all about how loving Dad really was. Clearly, most of them didn’t believe this, and every time Jesus said it, they got angrier. They tried to silence Him again and again. They even tried to kill him a couple of times. But it wasn’t until Jesus felt there were enough children who were beginning to understand His message that he finally gave himself over to them so they could kill Him. But before He did this, He told all of His brothers and sisters who would listen that he was going to take Dad’s punishment for them, and that once this was finished they would then be able to go back to the Father without any fear of being punished for the broken vase.

Where We Are Today

The best part of this story is that Jesus’ crazy plan actually worked. Within just a few days of Jesus’ death, He came back to life, completely unharmed. Some say he was exactly the same as when He left. Others say he was even better. But no one argues that he was amazingly unfazed by the so-called ‘punishment’ of the Father, and now He could assure them that this is what Dad had always meant for them.

Dad was never hellbent on killing them. Dad simply knew that the only possible result for breaking the vase was their own sense of being lesser than Jesus and Dad, and that ultimately they would have to die to that idea. Jesus knew destroying an idea like that could not be done by simply ‘removing’ it. He knew that it could only be done by REPLACING it with a new one.

This crazy idea that Dad is now happy with His kids again is still spreading like wildfire amongst the children. Some of them are still a bit mixed up as to whether or not Dad was ever angry. Others seem to prefer an angry father figure so that they can use Him as a fear tactic to control their other siblings. Still others have truly understood the stories that Dad told them for all of those years, and they realize that Jesus only had to die to implant an idea in their heads: that Dad wasn’t mad at them any more. Dad was never mad at them. Nor did Dad ever kill Jesus. Jesus got himself killed, by them, and even though it broke His heart, Dad played along in hope that Jesus’ idea would finally give Him his children back.

Honestly, telling this story in as few words as possible isn’t easy. There are so many nuanced truths buried in every sentence that I’m sure you’re a bit unsatisfied with some of the explanations given. To this end, I apologize. As a deep thinker I sympathize with you as I also have a hard time staying on the surface of a story, especially ones that have so many huge assumptions like this one. Still, I hope this has given you at least enough perspective to consider the idea that maybe, just maybe, the whole genius of Jesus was to implant an idea so deep into the culture of man that they would finally wake up from the proverbial “Matrix” of their own making.

If there are still to many questions unanswered for you, please feel free to respond on this post and I will do my best to reply.

As one final thought regarding the more challenging ideas presented in this story. My absolute favorite author, Thomas Troward, used to always say, “If anything is true, there is a WAY in which it must be true.” As such, even if you don’t agree with the conclusions drawn in this story, please at least understand that there is a WAY of understanding the Bible that draws me to these conclusions. This lens that I wear when reading the scriptures is something you can find as well… and I pray you do, if it’s what you desire.